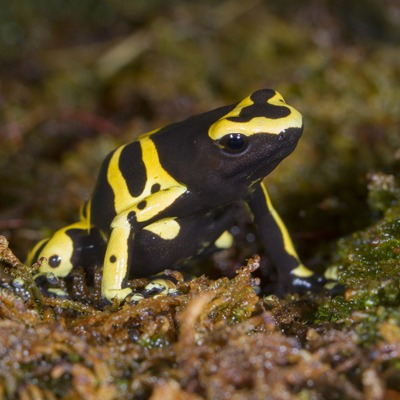 This brightly-colored frog is sometimes called the “Bumblebee Poison Dart Frog” for its distinctive, yellow and black-striped body. Toxic when eaten, this frog is native to the jungles of South America but is easily bred in captivity. The largest species of its genus, females are usually bigger and thicker than males, and each frog’s markings are unique to him or her.

The yellow-banded poison dart frog lives in South America, making its home on the rainforest floor: among leaf-litter, on open rocks, near rivers or rivulets, under logs, and on trunks of fallen vegetation. This frog is rather adaptable to habitat disturbance.

This frog is an insectivore, feeding on mostly ants (from which it derives its skin toxins).

Male frogs will chirp, buzz, trill, and hum to get a female’s attention, while also showing off their brightly colored bodies. After the female frog lays her eggs, it is the male who protects the eggs until they hatch into tadpoles. Then, the male frog carries the tadpoles on his back to small pools of water where they continue to develop.

The conservation status of the Yellow-Banded Poison Dart Frog is classified as least concern.