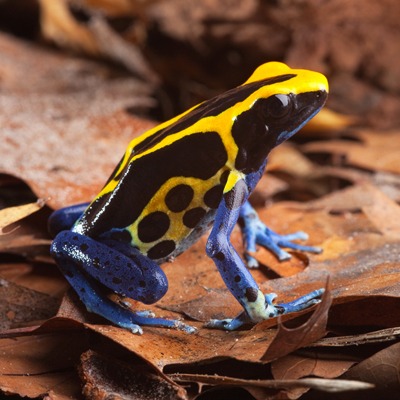 The yellow and blue poison dart frog is very active during the daytime and moves with short leaps. This species is bold, aggressive, and very territorial, especially males who are known to fight over territories. However, both sexes are known to defend their territories from frogs of the same species as well as those of other species. The aggressive behavior usually consists of calling, chases, and wrestling. Wrestling usually occurs between those of the same sex but can also occur between males and females.

These frogs are found in the southern part of South America. They live in humid and warm climates and prefer dark, moist environments, living on the rainforest floor and tree roots near water sources. Though they typically stay on the ground, they have been found in trees as high as 16 feet!

They are solitary animals, interacting with each other only during territorial fighting and breeding. Females usually produce between five to ten offspring per clutch. They lay eggs out of the water and then the tadpoles are carried by the males to puddles where they develop further.

The conservation status of the Yellow and Blue Poison Dart Frog is classified as least concern.