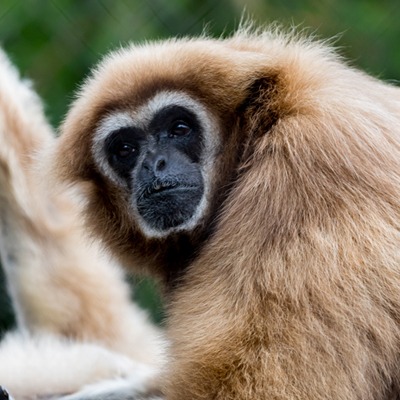 The white-handed gibbon is an endangered primate often found today in captivity around the world. Their distinct fur color can vary from black and dark brown to a lighter cream color. Gibbons are brachiators, meaning they thrive high above ground level in the trees as they use their long limbs to propel themselves through dense forest canopies. The gibbon also uses its curved fingers and elongated hands to its fullest advantage, making it one of the best climbers in the primate family.

The white-handed gibbon primarily lives in Asia, inhabiting the countries of Thailand, Malaysia, Sumatra, and Burma. The gibbon, which can be found in semi-deciduous and tropical evergreen forests, faces the severe threat of habitat loss.

Considered frugivorous, the gibbon’s diet consists of mostly fruit, while leaves and other plants make up the remainder. This primate eats a wide variety of different fruits, plants, and insects ranging from figs and berries to flower buds and tree vines. Gibbons are very selective eaters and they carefully choose fruit based on ripeness.

The white-handed gibbon is primarily active during the day, as gibbon families spend most of their time high up in trees and rarely come to ground level. They are mostly monogamous and live in groups of two to six. Females begin reproducing between six and nine years of age but reach full sexual maturity at age nine. They have one offspring every two to three years, and most of the care is provided by the female with help from males and older siblings.