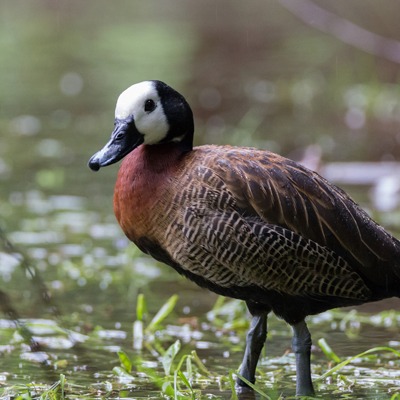 This long-legged duck has a distinct white face and neck patch that is different from the rest of its otherwise brown and black feathered body. Both the male and female whistling duck are similar in appearance, with the offspring typically having a grey, white or ash-grey colored face, throat, and bottom.

The white-faced whistling duck is found in tropical parts of Central and South America, and Africa. They occupy a variety of freshwater habitats, including lakes, swamps, large rivers, flood-plains and some artificial habitats, such as rice fields and sewage farms.

Their diet consists mostly of grass, seeds, mollusks, and other plant-based foods in their surrounding habitat.

During their breeding season, the white-faced ducks form colonies and create nests in long grass or reedbeds using vegetation in the surrounding area. They typically lay four to twelve eggs, which are then incubated for around one month. The chicks fledge, develop wing feathers for flight, eight weeks after hatching. During their incubation period, the duck is especially susceptible to predation, which forces them to seek shelter in thick, grassy areas.

The conservation status of the White-Faced Whistling Duck is classified as least concern.