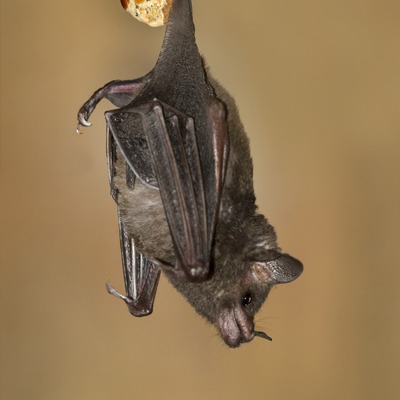 Seba’s short-tailed bats are one of the world’s 1,200 bat species. These tiny, half-ounce bats are insectivores and frugivores, meaning they eat insects and fruits. They live in colonies of 10 – 100 and are most active after sunset.

They are distributed throughout Central and South America and live in moist evergreen forests.

These bats eat at least 50 species of fruit, pollen, and insects.

Seba’s short-tailed bats roost in groups of 10 – 100 in caves, hollow trees, tunnels, and road culverts. There are two types of roosts: harems, which consist of a male with many females, and bachelor roosts, consisting of males without a harem. Females usually give birth to one baby, which clings to the female with its teeth, wings, and claws. Babies reach adult size and can fly on their own in 10 – 13 weeks.

The conservation status of the Seba’s Short-Tailed Bat is classified as least concern.