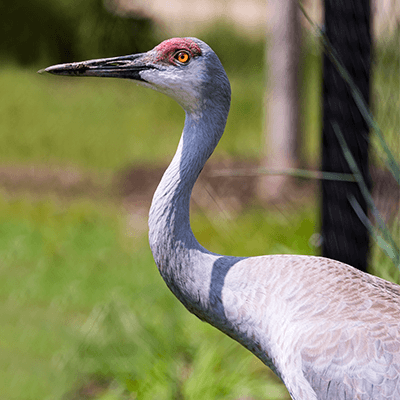 Sandhill cranes are large birds with heavy bodies, long necks, and long legs. They are uniformly gray in color, with a white cheek and a bald red crown on their heads. Sandhill cranes can be distinguished from other large wading birds in flight by their outstretched neck, and their wingbeats, which are a slow downward beat followed by a quick upward flick.

In North America, this species breeds as far north as Alaska and the Arctic coast of Canada. They also breed in the Great Lakes region and westward across Idaho, Nevada, and Oregon. Most sandhill crane populations nest in open grasslands, such as wet meadows and freshwater marshes or bogs.

Sandhill cranes are omnivorous birds and feed mostly on cultivated grains such as corn, wheat, and sorghum. In northern regions, a wider variety of foods are consumed, including berries, small mammals, insects, snails, reptiles, and amphibians.

These birds communicate primarily using physical displays and vocalizations. They use a series of sounds to signal their territory and to warn when a predator may be nearby. Sandhill cranes live and breed in pairs or family groups throughout the year. Also, sandhill cranes are perennially monogamous, meaning that breeding pairs remain together from year to year, maintaining the bond by performing courtship displays, remaining in close proximity, and calling together in unison.

The conservation status of the Sandhill Crane is classified as least concern.