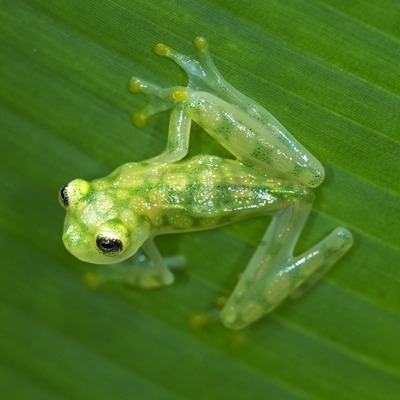 A transparent frog? As with many other glass frogs, the reticulated glass frog’s body is transparent. Their heart is visible from the outside of their bodies by a red color on their chests. The body also features yellow round spots and black dots on their light green skin. The nocturnal creatures are exceptional climbers, mainly due to their extensively webbed toes which help them get a grip on slippery branches.

This species resides primarily in Central and South America, as it can be found in central Costa Rica, Ecuador, Colombia, and Panama. Their habitat is typically wet lowland forests, usually near streams or rivers.

Similar to its red-eye leaf frog friend, the reticulated glass frog is a carnivore. Their diet is mainly small insects like crickets, moths, flies, spiders, and even other smaller frogs.

Male glass frogs are highly territorial throughout the wet season. Territories are made by using certain calls, like squeaking noises, to establish a new territory or to defend an established area. Females typically lay about 35 eggs on the underside of leaves hanging over streams or small rivers. The male guards the eggs both at night and during the day. The male frog will also engage in hydric brooding, which is when the male will lay his body over the eggs to further protect the eggs from intruders like wasps.

The conservation status of the Reticulated Glass Frog is classified as least concern.