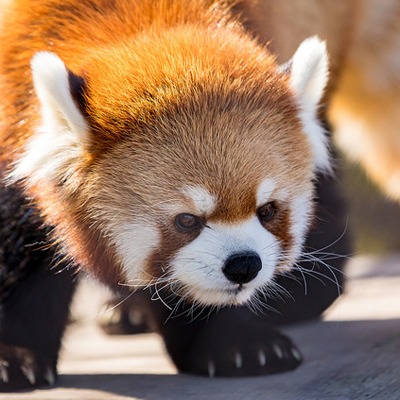 Red pandas are the only living member of their taxonomic family. While their scientific name, Ailurus fulgens, means “fire cat,” they share more similarities with raccoons and bears. Like giant pandas, red pandas are bamboo eaters and are native to Asia’s high forests.

At Henry Vilas Zoo we’re taking action for wild red pandas by partnering with the Red Panda Network. Learn about the network and their conservation efforts here.

Red pandas are found in the Himalayas and mountainous regions of northern Myanmar, and the western Sichuan and Yunnan Provinces in China. They live in temperate climates in forests with thick bamboo.

85 – 95% of their diet consists of bamboo, but they also eat roots, fruits, small lizards, and bird eggs.

Red pandas are largely solitary, but occasionally come together in small groups and play with each other. Females are only fertile for a few days, and undergo delayed implantation: the fertilized eggs don’t implant or develop right away. Females build birthing dens in hollow trees, stumps, or rock crevices. Litters typically consist of two cubs, though a female may have one to four. Cubs stay with their mother until they are one year old.