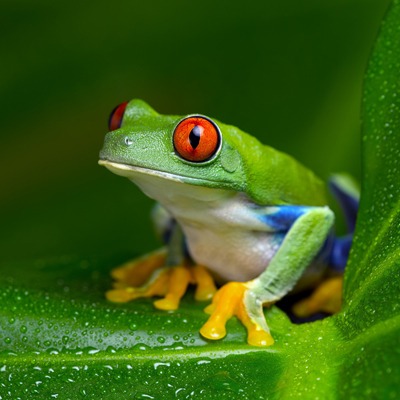 The red-eye leaf frog is widely known for its large, bright red eyes. This comes from a possible natural adaption to nocturnality. Their bodies are nearly neon green, but they can sometimes range from more blue or yellow coloring. The upper legs of this tree frog are bright blue, while their feet can be bright orange or red. This startling contrasts in color help keep enemies at bay.

Found throughout most of Central America, the red-eye leaf frog inhabits tropical rainforest areas, most commonly in lowland rainforests and near bodies of water.

This species of the tree frog is carnivorous and feeds mainly at night. Their light green color permits the frog to remain hidden in the leaves, allowing them to silently wait for insects and other small animals to come along. Their diet consists mostly of crickets, moths, flies, and sometimes smaller frogs.

To attract females, male red-eyed tree frogs join together to make loud croaking noises, all while they compete for territory near potential mates. Several competing males will remain on the females back from several days until she finds a suitable spot to lay her eggs. All the competing males will then attempt to fertilize her eggs. The eggs are typically laid under leaves hanging over bodies of water. Once the egg has hatched, the tadpole will slide down to the waiting water below.

The conservation status of the Red-Eye Leaf Frog is classified as least concern.