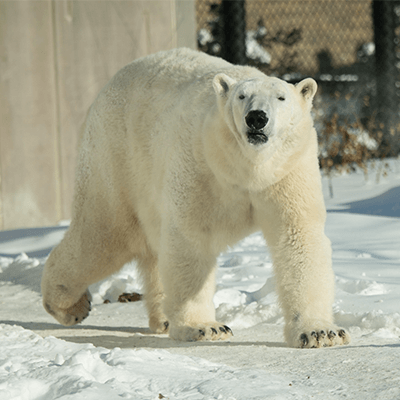 The polar bear is the largest living land carnivore. The polar bear’s species name Ursus maritimus means maritime, or relating to the sea. Recent findings suggest that polar bears evolved from a common ancestor of the brown bear between 350,000 and 6 million years ago. The polar bear’s ancestors went through a series of evolutionary changes in order to survive in the Arctic.

Henry Vilas Zoo partners with Polar Bears International to help raise funds and awareness to save the wild polar bears and the sea ice they depend on. Find out more about PBI here.

Home is on the sea ice and where the seals are. The polar bears home range is far larger than any other species of bear. They live throughout the Arctic in Canada, Norway, Russia, Greenland, and parts of the US.

They mainly eat seal BLUBBER, depending on the high-fat content, and can eat 100 pounds of seal blubber in one sitting! Polar bears can detect prey nearly half a mile away (1 km) and up to 3.2 ft (1 meter) under snow due to their incredible sense of smell.

Mating happens in the spring as the snow starts to melt. Pregnant females will build a maternity den, like a small snow cave, and wait for the snow to close the entrance. Here she’ll birth and nurse her young in the winter until spring. During her entire time in the den, four to eight months, the mother doesn’t eat or drink.

The conservation status of the Polar Bear is classified as vulnerable.