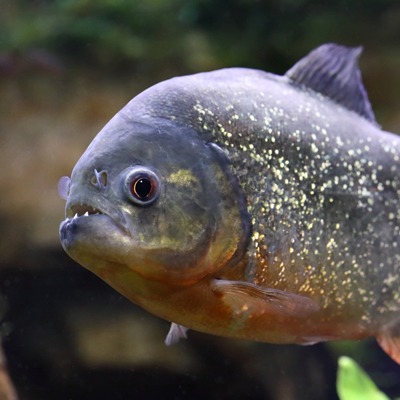 Piranhas are a freshwater fish known for their sharp teeth and aggressive, predatory demeanor. The most common of this species is the red-bellied piranha, which is characterized by its red underside, black spots near the gills, and silver flecked scales.

This species is typically found in the freshwater rivers, lakes, and reservoirs of South America. In certain areas, they are also known to inhabit flooded forests, such as those found in the Brazilian Amazon.

While many believe this species to be carnivorous, they are known to feast on fruit, seeds, algae, and aquatic plants, leading to their classification of omnivorous.

Piranhas breed during the rainy season, typically a two month period that varies depending on location. The female lays close to 5,000 eggs on vegetation, which is often a bowl-shaped nest built by the male.

The conservation status of the Piranha is classified as not evaluated.