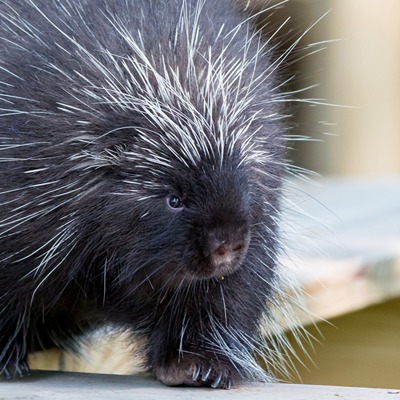 The North American Porcupine is the second largest rodent in North America, out-sized only by beavers, and is characterized by its stout, lumbering form and spiny coat. Like porcupines found in other parts of the world, North American porcupines have arboreal adaptations, such as long claws, that allow them to navigate the large trees in their habitat.

North American porcupines are native to the coniferous and mixed-forest habitats of Canada, the northeastern and western areas of the United States, and northern Mexico. This species can also be found in grasslands, desert shrub, and sometimes even the tundra.

This species is a generalist herbivore whose diet varies throughout the year in response to small changes in plant chemistry. In spring and summer, when high protein foods are readily available, feeding rates are reduced and in the autumn, feeding rates increase in preparation for the winter food shortage.

North American porcupines breed once a year and are considered female defense polygamous, which means that a male defends a female for one to four days prior to breeding. For the first six weeks after birth, parental care is provided by the mother.

The conservation status of the North American Porcupine is classified as least concern.