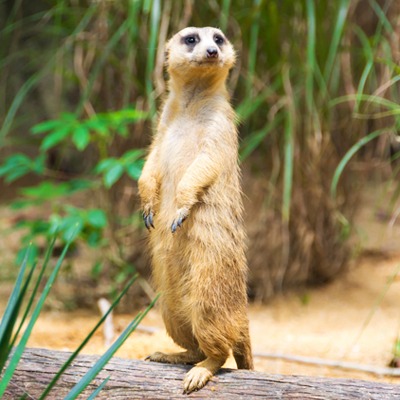 Meerkats are highly social and live in packs of up to 30 individuals. Meerkats exhibit sentinel behavior where one member of the group poses as a lookout, watching for predators and other danger. The sentinel sounds an alarm by giving a distinct bark. If a parent sounds an alarm, its offspring run to and huddle around their mother.

Meerkats inhabit portions of South Africa, Botswana, Zimbabwe, and Mozambique. They inhabit the most open and arid countries of any mongoose species. They are found in areas of the savanna in open plains.

Meerkats are mainly insectivorous, eating insects, arachnids, centipedes, and millipedes. They will also eat some small vertebrates, eggs, and plant matters. They are foragers, digging in soil and grass and overturning rocks to find food.

The average gestation period is 11 weeks and the average litter produces three offspring. Baby meerkats open their ears when they are ten days old. Mothers carry young by the nape of the neck and the father meerkat takes an active role by guarding the young. Because of the highly social nature of meerkats, nonbreeding individuals often act as helpers, guarding and provisioning the young.

The conservation status of the Meerkat is classified as least concern.