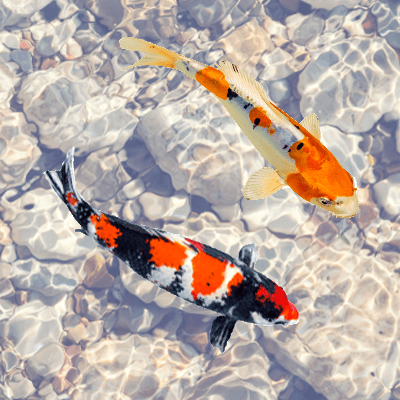 Koi fish are colorful, ornamental versions of the common carp. During the 1820s, Japanese farmers kept and bred the prettiest, most colorful carp, resulting in the koi we see today. This species was originally farmed for food. The word “koi” comes from the Japanese word for “carp.”

Wild koi are native to fresh bodies of water around the Black, Caspian, and Aral Seas.

They eat mainly invertebrate animals, but also eat fish eggs and decomposing animals and plants. They eat food found at all depths of water.

Koi will migrate long distances to reach their preferred spawning grounds – flooded meadows or marshy areas. They attach their sticky eggs to water plants or any object underwater. The eggs hatch as larvae and stay in warm, shallow flooded areas until they are big enough to swim in more open waters.

The conservation status of the Koi is classified as vulnerable.