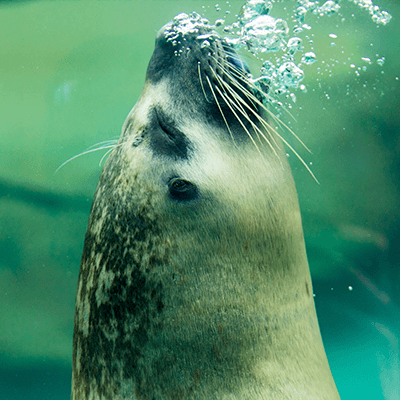 Harbor seals swim with all four flippers, moving their hind flippers from side to side to propel themselves forward and using their fore flippers to help them steer. They can swim forward, upside down, and can move up to 12 miles per hour.

Harbor seals are found in the cold waters of the northern Atlantic and Pacific Oceans. They inhabit shallow areas of estuaries, rivers, and places where sandbars and beaches are uncovered at low tide.

They mainly eat fish and some octopus, squid, and shellfish. Adult harbor seals can eat five to six percent of their body weight per day, or roughly 10 to 18 pounds (4.5 to 8.2 kg). Harbor seals don’t chew their food; instead, they swallow their food whole or tear it into chunks. With their back molars, they crush shells and crustaceans.

The mating season generally occurs in late spring through fall. Prior to the pupping season, males and females exhibit pre-mating activity such as rolling, bubble-blowing, and mouthing each other’s necks. Harbor seals have a total gestation period of about nine to eleven months. Females generally give birth to one pup each year.

The conservation status of the Harbor Seal is classified as least concern.