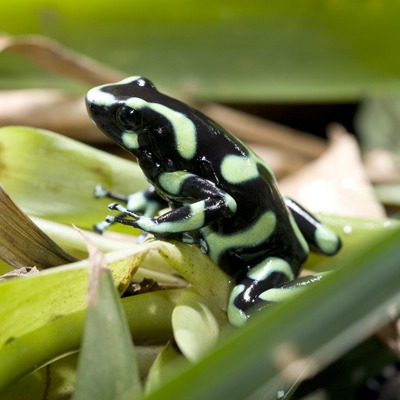 This species of poison dart frog comes in many different colors. The most common color pattern features black with either green or light blue bands. Similar to most frogs, the head is fused to the trunk of the body with no tail. The “Poison” in their name references the poison glands located throughout the surface of their body. These glands are not only harmful to potential predators, but to humans as well, as unprotected contact can be highly dangerous. Most predators stay away, however, as the frog’s bright green skin gives them all the warning they need.

The green and black poison dart frog can be found in Central and South America, in countries like Nicaragua, Costa Rica, Brazil, and Bolivia. They are found on the rainforest floor, usually near small streams or bodies of water.

This species feeds mainly on small invertebrates like ants and other smaller insects. Ants have high levels of alkaloids in their tissues which helps make the frog’s skin poisonous and dangerous to touch. Poison dart frogs also have excellent vision which helps them capture even the tiniest of insects.

Like many other frog species, the green and black poison dart frog is diurnal and very protective of its young. Mating occurs once the male frog establishes a territory by fighting off other lurking competitors. Once the mate has been chosen by the female, the male will guard the territory, along with the eggs the female has laid.

The conservation status of the Green and Black Poison Dart Frog is classified as least concern.