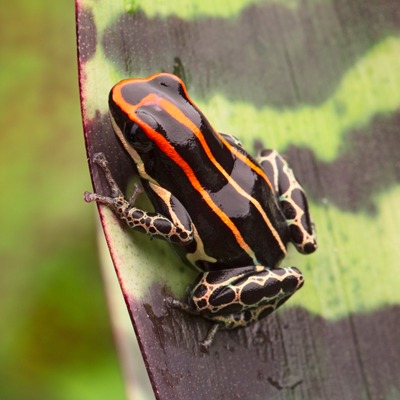 The Golfodulcean poison dart frog is one of the few in its family to become an endangered species. Due to lower birth rates and continual habitat destruction, this species has seen a drastic decrease in population numbers over time. This poison dart frog features a granular texture on its dorsal side, with a smoother, solid black head and back. The colorful patterns vary significantly, but their distinct color trait is their blue-green speckled legs. The blue-green color is contrasted with gold, red or orange colored stripes that run from the head to the back of the body.

This species commonly resides in lowland, wet forest areas throughout Costa Rica and other Central American countries, including Panama.

An adult Golfodulcean poison dart frog will feed on anthropods, mainly ants and mites. Ants have high alkaline levels in their tissues which contribute to the frog’s poisonous skin.

This species is known to be quite shy and will often hide in small rock crevices when approached by humans or other larger animals. Like its other poison frog family members, the Golfodulcean poison dart frog is territorial, establishing certain areas for his mate to lay eggs. The courtship ritual may last one to seven days prior to oviposition (laying eggs), which will include calling, circling, shaking of limbs, and/or sitting on the courting partner. The female will lay eggs every one or two weeks, with each clutch containing 7 to 21 eggs. The males will then guard the eggs throughout the following weeks.