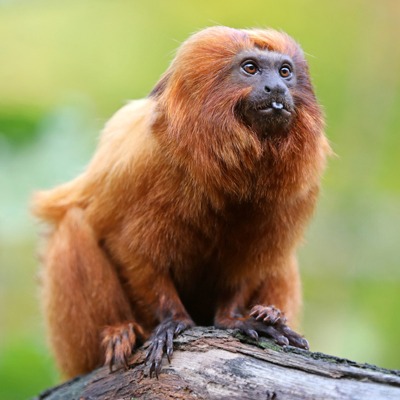 A lion monkey?! Golden lion tamarins get their name from their thick golden mane, which looks a lot like a lion’s mane. In the 1970s, there were fewer than 200 golden lion tamarins in the wild. Now, the Brazilian government works with zoos across the world to help save them by protecting their habitat and breeding, reintroducing, and relocating them. There are now over 1,000 tamarins in the wild; one-third are descendants from individuals bred in zoos and reintroduced into the wild.

Golden lion tamarins live in closed canopies 29 to 100 feet (10 to 30 m) off the ground in the humid forests of southeastern Brazil.

They are omnivores and eat spiders, snails, small lizards, eggs, small birds, fruits, and vegetables. They use their long, skinny fingers to grab insects out of trees bark – this is called “micromanipulation.”

Golden lion tamarins live in groups of two to eight family members. The groups are comprised of a breeding pair, offspring of one or two litters, and possibly other relatives. Baby tamarins will cling to their mothers for the first few weeks of life. After those few weeks, the male does the largest share of caring for the offspring, with the female taking them to nurse. Twins are common among golden lion tamarins. Food sharing is important among group members to maintain social bonds, seeing as they are a very social species.