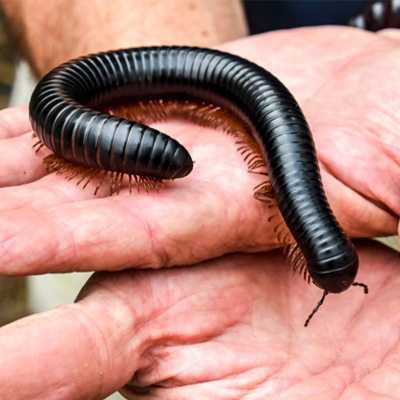 The giant African millipede has 300 to 400 legs. This millipede has weak jaws and cannot deliver a good bite. As a defense, it coils into a ball and secretes a foul fluid from its pores. Instead of breathing with lungs like mammals, millipedes breathe through tiny pore-like holes located down the length of their body, called spiracles. Because of this special breathing adaptation, if a millipede gets too wet, it could potentially drown.

They are detritivores, meaning they feed on dead and decaying organic (plant) matter within their habitat.

Communication is important! Giant African millipedes have poor eyesight, so their sense of touch seems to play an important role. They can feel with their antennae and their legs, and can sometimes communicate by scent as well. When the time comes to reproduce, a male giant African millipede will wind around a female millipede. A few weeks later, the female will lay hundreds of eggs in a hole in the ground. Once a millipede hatches, it is on its own. There is no parental involvement, and it’s up to the newborn millipede to find food and shelter.

The conservation status of the Giant African Millipede is classified as least concern.