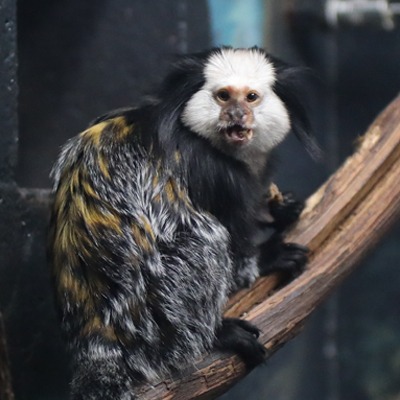 You’ll know a Geoffroy’s marmoset when you see one! These distinct monkeys are not only known for their white cheeks, forehead, and throat, but also for their dark ear tufts. Many of their features, such as their claws, are highly unusual among primates.

Geoffrey’s marmosets are found in the lowland rainforests of Brazil.

Their omnivorous diet (eating both plants and animals) includes fruits, flowers, nectar, lizards, frogs, and spiders. They also consume a variety of tree saps and gums, a type of tree sugar.

Marmosets are very social creatures and commonly live in groups of eight to ten, led by a dominant female. They are one of the only species of monkeys/apes that frequently give birth to twins. After the offspring are born, many members of the pack, including males, help raise them.

The conservation status of the Geoffroy’s Marmoset is classified as least concern.