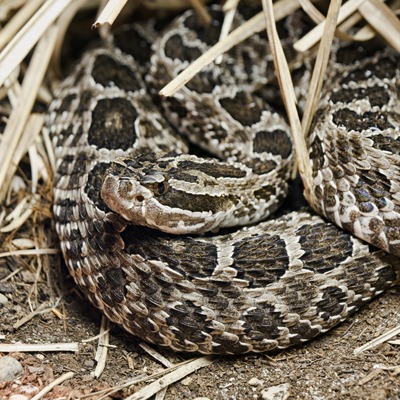 The eastern massasauga rattlesnake belongs to the pitviper group, which are members of the larger reptile family, vipers. As with all vipers, this rattlesnake has hollow fangs that are used to inject poisonous saliva, or venom, into their prey or enemies. These pitvipers also have sense organs on both sides of their head called ‘pits’, which are used to detect body heat in nearby areas. They use this ability when catching warm-blooded prey, which makes up a majority of their diet. The most recognizable feature, however, is the ‘rattling’ tail at the end of the snake, which is used to attract prey and signal danger when an enemy is nearby.

Eastern massasauga rattlesnakes are usually found in damp lowland habitats such as swamps, marshes, wet prairies, and bottomland forests. They can be found throughout the central United States and as far north as Canada.

This rattlesnake feeds mainly on smaller mammals like mice and shrews. They are also known to occasionally eat other snakes, bird eggs, and insects when the prey is smaller and easier to take down.

Eastern massasauga rattlesnakes are active from April through late fall and hibernate throughout the cold winter months. They tend to hibernate alone or in small groups, typically in lowland burrows near sources of water. This species also does not typically stray far from its usual hibernation site year after year. When they feel a sense of danger, the rattlesnake vibrates its rattling tail to signal potential aggression.

The conservation status of the Eastern Massasauga Rattlesnake is classified as least concern.