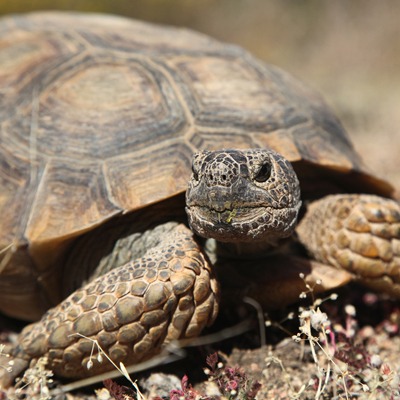 The desert tortoise is medium-sized for its species and varies in color from light to dark brown with orange or yellowish markings. Male desert tortoises have long, curved, gular horns (located under their neck as an extension of their shells) that are used for leverage in male to male combat.

The desert tortoise is found in the deserts of the southwestern United States and northwestern Mexico. Depending on the deserts they occupy, these tortoises can be found to inhabit anything from thorn scrub to desert scrub and even tropical deciduous forests.

Desert tortoises are herbivores that survive mostly on low-growing plants and fallen leaves. Their diet consists of bark, stems, fruits, flower, shrubs, woody vines, and leaves. They also drink large amounts of water from temporary pools during the rainy season.

This species of tortoises have multiple mates during their lifetimes. During their breeding season, males fight one another for access to receptive females who will eventually lay 1 to 14 round, off-white eggs. While females go to extensive measures to create and protect their egg nests, they eventually wander away and leave their young to fend for themselves. For every 15 clutches, or groups, of eggs that are laid, only one individual is likely to live to age 20.

The conservation status of the Desert Tortoise is classified as vulnerable.