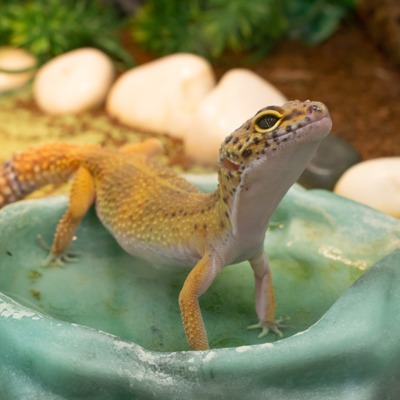 The common leopard gecko can be found in dry and semi-dry regions, as well as arid grasslands. Leopard geckos are commonly found throughout southeast Afghanistan, Iran, and Iraq.

This species feeds on smaller creatures such as insects, scorpions, centipedes, and spiders.

Leopard geckos are solitary. Females typically lay two eggs which are subject to temperature-dependent sex determination, meaning that their gender is determined by how warm the egg is during development. Females prefer damp, humid environments for laying and burying the eggs.

The conservation status of the Common Leopard Gecko is classified as not evaluated.