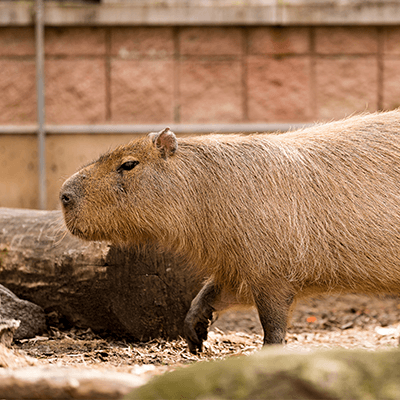 The capybara is the largest rodent in the world and belongs to the genus Hydrochoerus, along with the only other member, the lesser capybara. Its other distant relatives are the guinea pig and rock cavies, while its closer relatives include the agouti, the chinchilla, and the coypu.

The capybara is a strictly South American rodent species. Its range extends throughout most of Brazil, Uruguay, Venezuela, and Columbia, south into the Argentinian pampas, and west to the Andes.

Capybara’s diets consist mostly of grasses and aquatic plants, with some bark and fruit.

Capybaras are social animals meaning you will typically find them in groups of 10 to 20 others. The group may consist of two to four males and four to seven females with the rest being their young. Group living appears to be extremely important to capybara survival—without a group, an individual is excluded from most grazing habitats and has little chance of finding a mate. Capybaras are polygynous and promiscuous, meaning dominant males in social groups try to monopolize mating activity by mating with multiple females, sometimes with no success.

The conservation status of the Capybara is classified as least concern.