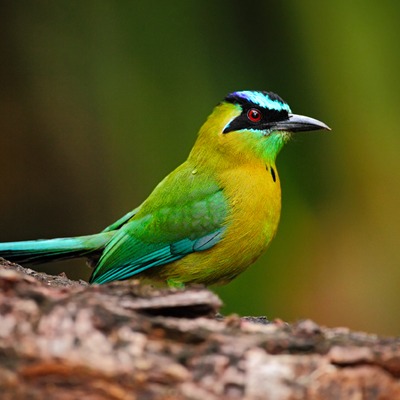 The blue-crowned motmot typically resides in rainforests, second-growth forests, forest edges, shady gardens, and shaded coffee farms. They can be found throughout Mexico, Central America, and most of South America.

This species is primarily insectivorous, meaning insects consist of most of their diet. They also include fruits in their diet.

Blue-crowned motmots live in pairs, never flocks. A pair will have three to five chicks per clutch or group of eggs. In order to appeal to a potential mate, blue-crowned motmots will sometimes be seen carrying inedible objects in order to impress a mate or disrupt an established pair.

The conservation status of the Blue-Crowned Motmot is classified as least concern.