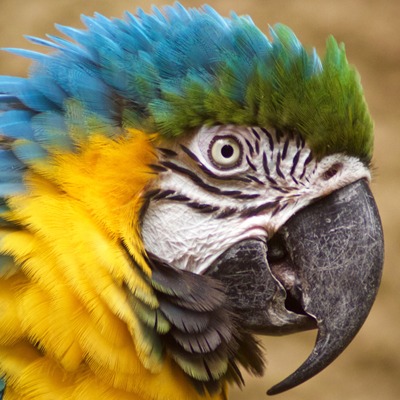 About Blue and Yellow Macaw

The blue and yellow macaw is one of the most eye-catching birds in the animal kingdom. With blue on their backs and wings, yellow feathers on their stomach, and green colored tips on the end of their wings, this macaw is very vibrant in the trees and in the sky. It is perhaps best known for its ability to mimic words and sounds, which reflects its intelligence and social awareness.

The blue and yellow macaw primarily resides in rainforests and riparian zones, or areas between land and a river or stream. This bird is found throughout eastern Panama, in parts of Columbia, Ecuador, Venezuela, Brazil, Bolivia, Paraguay, Argentina, and northern Peru.

Its diet consists primarily of seeds, nuts, and fruits.

This species is usually found in pairs, but may form flocks of up to 30 birds. Females lay one or two eggs and incubate them for 24 to 26 days while the male brings her food.

The conservation status of the Blue and Yellow Macaw is classified as least concern.

Facts about Blue and Yellow Macaw