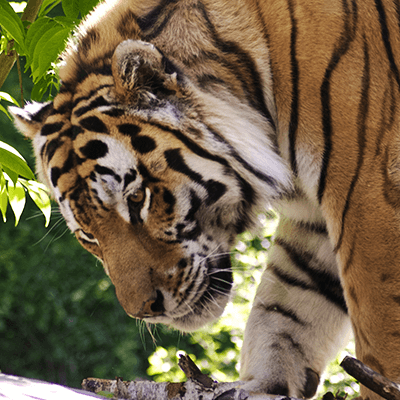 Amur tigers love the cold! They have adapted to tolerate temperatures that fall far below zero. They are also excellent athletes and can leap up to 33 feet. Sadly, Amur tigers are critically endangered — there are fewer than 500 left in the wild.

The Henry Vilas Zoo has joined forces with the Tiger Conservation Campaign to raise funds and awareness to help save wild tigers from extinction. Learn more about the project here.

They live in the far east region of Russia in the boreal forest (taiga), and in northern evergreen forests where there are bogs, marshes, and shallow wetlands.

Amur tigers have a carnivorous, meat-eating diet, consisting mostly of large animals such as elk, deer, and pigs. One tiger will eat 20 – 60 pounds (9 – 27 kg) of meat in one meal.

After 3 – 3.5 months, a female will give birth to 2 – 6 cubs (the average is 2 – 3 cubs). The female cares for the cubs by herself. After three months, the cubs begin to accompany their mother on hunts. At 18 months old, the cubs are capable of hunting for themselves, though they don’t leave their mother until they’re 2 – 3 years old.