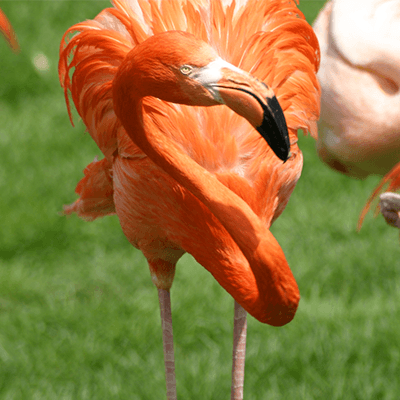 American flamingos are one of the larger members of the Aves (bird) class. They are best recognized by their bright pink coloration. They have long, graceful necks and legs which, in proportion to body size, are the longest of any bird. The word “flamingo” is derived from the Spanish word for “flaming” or “red feather.”

American flamingos live across the entire shoreline of Africa, along the Mediterranean Sea, and in parts of Asia and India. Additionally, they can be found in the southern United States, the Caribbean, and the Yucatan Peninsula where there are warm, coastal habitats. They tend to occupy large mud flats where they can easily form loose mud into mounds that they use as nests.

Flamingos tend to eat organic ooze (bacteria and microscopic organisms), worms, nematodes, mollusks, crustaceans, insects and larvae, and even vertebrates such as small fish. The crustaceans in their diet are responsible for the bright pink color.

Flamingos live, mate, and feed in large flocks, which can consist of thousands of individuals. Straightening the neck to its full length sends signals to other members of the flock. The motion is used in the mating ritual to attract attention and in threats or displays to intimidate other members of the flock. The American flamingo is also fiercely territorial, sending strong physical signals to warn intruders to leave if the flamingo feels threatened.

The conservation status of the American Flamingo is classified as least concern.