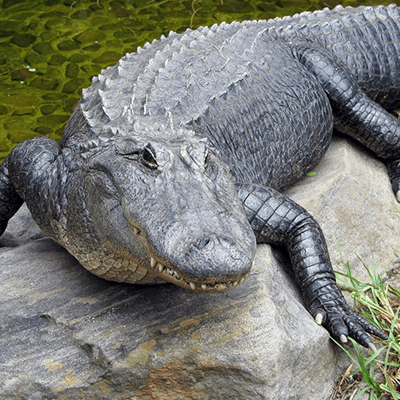 Stop, chomp and roll… alligators are ambush predators. That means that they stay very still while they hunt, with their eyes and nostrils above water. When they get close to unsuspecting prey, they rush out of the water, grab their prey and roll to drown them underwater. Yikes! Alligators are cold-blooded, meaning their body temperature is determined by their environment.

American alligators are found in the southern United States along the Atlantic coast and the Gulf of Mexico in freshwater swamps, marshes, lakes, and rivers. They also create burrows for shelter and hibernation during freezing temperatures.

Their diet consists of animals including fish, turtles, snakes, and small mammals.

It’s not easy being a gator! They typically lay 35 – 50 eggs. Sadly, 80 percent of babies are eaten by predators including snakes, birds, raccoons, otters, large fish, and other alligators. Once they reach 4 feet long (1.2 meters), they are mainly preyed on by humans.

The conservation status of the American Alligator is classified as least concern.