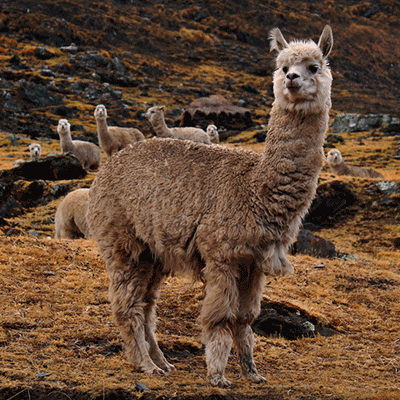 The alpaca is a domesticated species of South American camelid and often confused with the llama. Although closely related, the alpaca is smaller than the llama and is not bred to be a working animal. Instead, they are farmed for their fiber, a strong material that becomes a valuable asset for any alpaca farmer.

Alpacas primarily live in the central and southern Andes mountains in high plateau from Peru to Argentina. They are also domesticated across the world.

Their diet mostly consists of grasses and some woody shrubs.

Alpacas have an incredible system of communication. Not only do they communicate with each other through sounds, but they also signal warnings and threats through their body language. Spitting is a common trait amongst alpaca groups, as they spit to show signs of distress, fear, or to display dominance. The males predominantly lead groups of alpacas, visibly showing dominance and controlling the rest of the herd.

The conservation status of the Alpaca is classified as not evaluated.