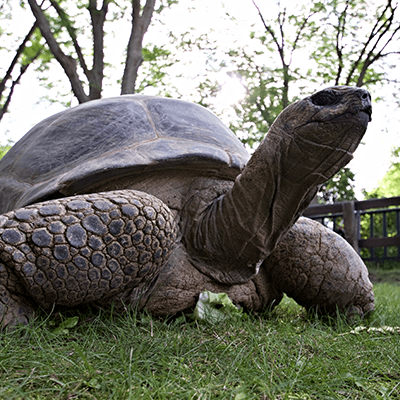 The Aldabra tortoise is the second largest tortoise in the world! Their name comes from Aldabra Atoll, the island that they are native to in the Seychelles Archipelago. Populations have also been introduced to two other islands in Seychelles.

They eat mainly plants (grasses, leaves, stems, and herbs) with some invertebrate animals and meat.

Aldabra tortoises breed between February and May. Female tortoises lay four to 14 eggs at a time in holes up to ten inches deep, and the eggs hatch after three to six months. When the tortoises are born, they are a tiny three inches!

The conservation status of the Aldabra Tortoise is classified as vulnerable.