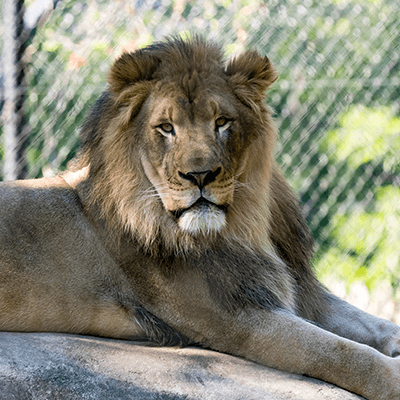 Lions are the world’s most social felines. They live in groups of related females, called prides. Over the past decade, lion populations have declined by 30 percent.

Henry Vilas Zoo works directly with the Ruaha Carnivore Project to help aid conservation efforts for large carnivores in Tanzania, like the lion. Learn more about their work here!

Lions live in a wide range of habitats, from open plains to thick brush and dry thorn forest. They only live in Africa, from the Sahara’s southern fringe to northern South Africa.

They mainly eat large animals that weigh 100 – 1,000 pounds, like zebras and wildebeests. In times of food shortage, they also catch and eat smaller animals like rodents and reptiles.

Females usually stay in their mothers’ pride for life, while young males are driven from their pride when they grow large enough to compete with the dominant males. Males search for a pride to take over and will kill all cubs that cannot run from them. On average, they will hold leadership of a pride for two years.

The conservation status of the African Lion is classified as vulnerable.