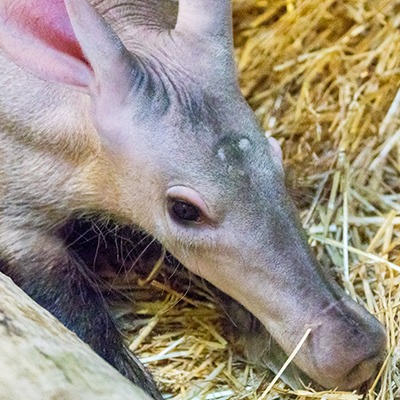 The name of this fantastic digger means “earth pig” in the Afrikaans language. Aardvarks are the size of small pigs, but have very thick skin and do not possess a fat layer. They are notable for their long nose.

A variety of habitats including grassland, savanna, and woodlands, south of the Sahara desert where there is enough food. They often live in temporary holes, but can also live in complex and intricate burrows which can have eight or more entrances and extend as much as 19 feet (6 m) underground.

Female aardvarks give birth in their burrow and the young remain underground for several weeks while maturing. Offspring are taken care of by the mother until they are independent at about six months, after which they dig their own burrows.

The conservation status of the Aardvark is classified as least concern.