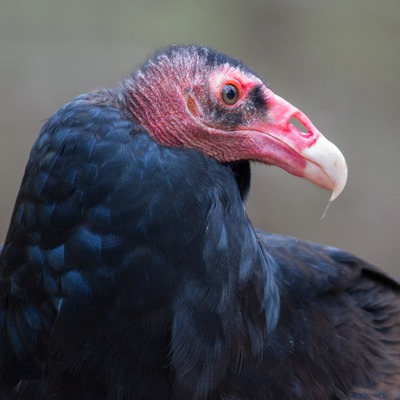 Turkey vultures are a highly distinctive bird of prey. Known for their pinkish-red head, five to six-foot wingspan, and brownish-black plumage, there are six subspecies of turkey vulture which can be distinguished by the intensity of the color of their head.

Turkey vultures are found throughout a broad range, from Canada as far south as Chile. Due to their wide distribution, they occupy a range of habitats, such as temperate forests, coastal deserts, grassland, and farmlands.

Turkey vultures usually roost in large community groups. Their nest sites are in sheltered areas such as hollow trees or logs, crevices in cliffs, and old buildings. They either do not build nests or built very little nests. Rather, they lay their eggs on debris or the flat bottom of their nest sites. Eggs are incubated for 30-40 days and fledge at 70-80 days. About a week after they fledge, they are independent.

The conservation status of the Turkey Vulture is classified as least concern.