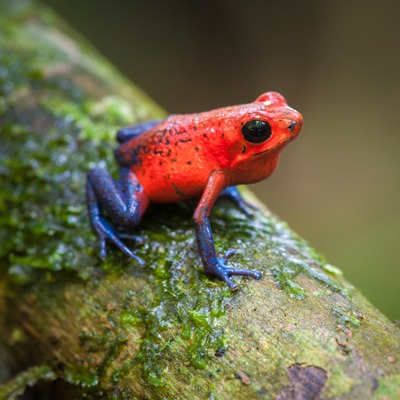 The strawberry poison dart frog is slender compared to similar species, with the frog’s colorful skin also featuring bilateral symmetry. This means the patterns on their skin are symmetrical, however the color variations for this species are the most diverse in the entire poison dart frog family. Their skin can range from strawberry red, blue, yellow, white, green, orange to black. Their bodies are compact, with four un-webbed fingers on each hand and foot.

This species typically resides in rainforest habitats and also in cacao and banana groves. Unlike some other poison dart frogs, this frog tends to spend most of its time on the rainforest floor in leaf litter, however, they frequently climb trees and vines.

Strawberry poison dart frogs use a “wide foraging” feeding method where they stick out their tongues to catch ranging numbers of small prey. They mainly eat smaller insects like ants, which is where they get the alkaline toxins for their poisonous skin. They have also been known to eat mites and other small arthropods.

With their highly territorial behavior, males must establish certain areas in order to find a successful partnership with a mate. If other intruding frogs invade an established territory, the resident male frog will begin wrestling the invading frog until it has pinned it completely on the ground. Generally, strawberry poison dart frogs will spend most of their energy feeding, mating, and taking care of their offspring by defending their territory.

The conservation status of the Strawberry Poison Dart Frog is classified as least concern.