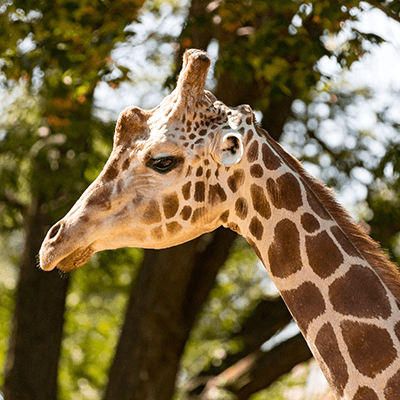 Reticulated giraffes are the world’s tallest mammal, with males standing 18 feet tall! Both male and female giraffes have a spotted coat. The pattern of the coat varies and helps the giraffe camouflage in different habitats. Giraffes are social animals, living in loose, open, unstable herds varying from 10 to 20 individuals.

The Giraffe Conservation Foundation (GCF) is an organization dedicated to a sustainable future for all giraffe populations in the wild. Find out more about the foundation and how you can get involved here.

Giraffes live in the dry savannas and open woodlands of northeast Africa in Kenya, Somalia, and Ethiopia. Because they only occasionally drink, giraffes can be found away from a water source.

Giraffes spend most of their time eating. They eat mainly leaves from Acacia trees with some flowers, seed pods, and fruit. An adult male can eat up to 146 pounds (66 kg) of food in one day!

Female giraffes have a gestational period of 15 months and give birth standing up! Newborn calves get to their feet 15 minutes after birth. At birth, giraffe calves are 6.5 feet tall from the ground to their shoulders and weigh 110 pounds.

The conservation status of the Reticulated Giraffe is classified as vulnerable.