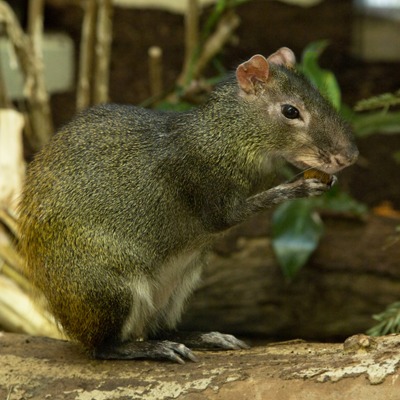 A relative of the guinea pigs, the orange-rumped agouti look similar but are larger and have longer legs, making them efficient runners. They frequently live in small groups, believed to be both for protection and because they are very social animals.

The orange-rumped agouti is found in areas of northeast South America and even on some islands along its coast. Their habitat varies vastly as they mainly look for land that offers good shelter to build their home; deserts, swamps, shrublands, flooded grasslands, savannas, and mangroves are all common habitats for the species to live.

Their favorite foods are seeds and nuts, but in the event that there is a shortage of those items, they can and will consume items like leaves, other animals, and various kinds of plants. Oftentimes, much like a squirrel, they store their food to prepare for a shortage. To eat, agoutis sit on their hind legs and hold the food in their forepaws.

As a monogamous species, the agoutis need a large space to court and mate, which does not lend well to easy breeding in captivity. In the wild, they often live in pairs or small family units with other parents and their offspring. This specific species does not have data around their mating cycles, but based on other members of their family, it’s thought that they mate twice annually if enough food is available. They have one to four offspring at a time after a 104 to 120 day gestation period.

The conservation status of the Orange-Rumped Agouti is classified as least concern.