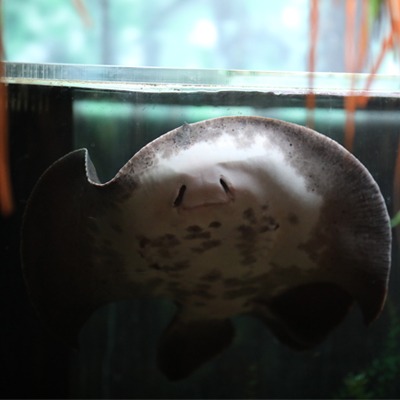 Just one of a few ray species that evolved in freshwater, the ocellate river stingray has an ovular shape with a grey and brown upper surface area covered in yellow-orange spots. It may be beautiful, but watch out for that big spine at the end of its strong tail as it can deliver a painful sting!

Found in South American river systems, this species of stingray is heavily populated in the Brazilian Amazon region. They prefer tropical freshwater rivers at varying depths from half a meter deep to ten meters deep. Calm waters are their favorite and they can be found partially buried under sand at the edges of brooks, streams, and lagoons.

They are primarily carnivores, eating fish, insects, mollusks, and crustaceans. As pups, they will eat plankton, introducing a carnivorous diet as they grow.

The ocellate river stingray is polygynous, however, the males only appear to mate every few weeks. Rather than using cues from the seasons, this species uses the river’s hydraulic cycles to inform their reproduction. Although the average number of offspring is seven, they can have 3 to 21 pups at a time!