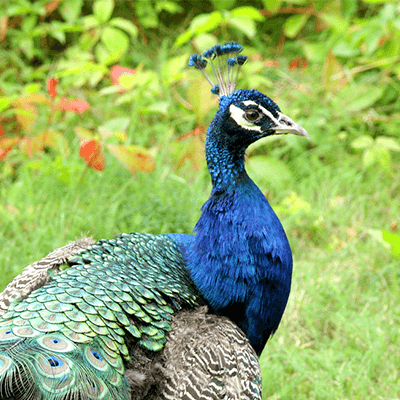 In the bird world, it’s common for female peafowls to have dull coloring to camouflage them from predators. On the other hand, males tend to be bright and colorful to help them attract females!

They are native to India, Sri Lanka, Nepal, Bangladesh, Pakistan, and Bhutan in open forest habitats.

Peafowls are selective when choosing their mates. Peahens (females) favor larger males who have the largest numbers of eyespots on their tails. Peahens typically begin breeding around two years old, laying between 6 to 12 eggs. The babies, peachicks, are born weighing three to four ounces.

The conservation status of the Common Peafowl is classified as least concern.