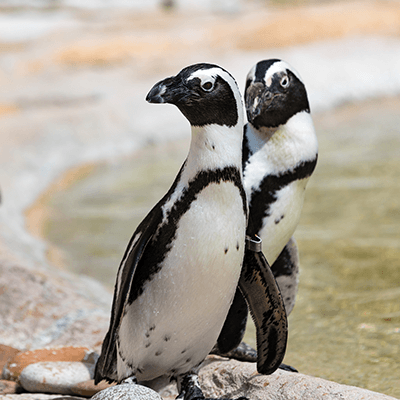 Every October, the zoo celebrates African Penguin Awareness Day to raise awareness for African Penguin conservation efforts. This is through a strong partnership with the Southern African Foundation for the Conservation of Coastal Birds (SANCCOB). Learn more about their efforts here!

African penguins live on 24 rocky islands along the southwestern coast of Africa. The largest colony is located on Dyer Island and they are densely distributed around cold, nutrient-rich waters of the Benguela Current.

These carnivores eat ocean fish like anchovies and sardines, as well as some squid, shellfish, and crustaceans.

Male and female penguins tend to breed together for life, starting at an average age of four years. A female will lay two eggs and incubate them for 40 days, though on average, only one egg will hatch. Hatchlings then remain with parents until they are three to five months old. Chicks leave the colony but return a few years later to shed into their adult plumage.